In 2018, I started the project, building on top of Alpha Zero General, a Python implementation of the Alpha Zero project. I got the Spline rules implemented, but I couldn’t train a neural network to be any good at it.

In late 2018 and 2019, I started the Zero Play project as a rewrite of Alpha Zero General that was designed to be used as a library to build other games on top of. I also experimented with MiniGo, but couldn’t figure out how to extend it.

Used the new GUI feature of Zero Play to build a GUI for Spline. This made it easy to play a bunch of games against the basic MCTS AI, and it’s really hard to beat at 600 MCTS iterations. I did manage to beat it a few times when I was the second player, and it made surprising choices. I think when all its choices are guaranteed to lose eventually, it will sometimes pick a move that loses immediately. 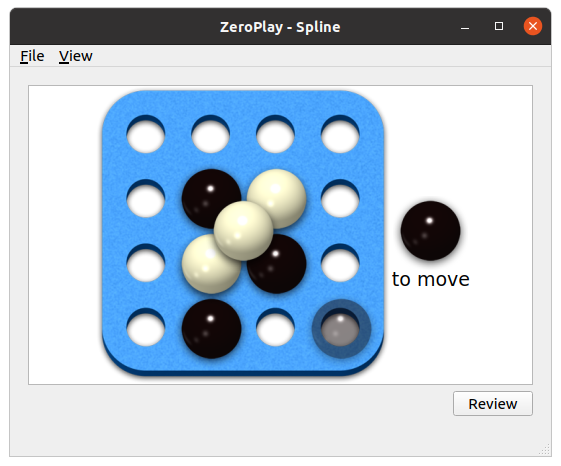 The weird moves were caused by a bug I found in most of the games: reporting valid moves even after the game had ended. That stopped the AI from taking advantage of the wins it found.

Added Spargo to the collection, and got the AI working. It kept getting stuck in infinite loops, until I added the superko rule. Unfortunately, that required a major rewrite. Instead of writing Game classes that passed around numpy arrays for the board states, I converted them all to GameState classes that contain a numpy array. That let me hold a set of previous board states within the GameState class, so I could check for repeated positions. Now, the Spargo AI works, although it doesn’t seem too smart at a few hundred iterations. However, it did surprise me with this comeback: 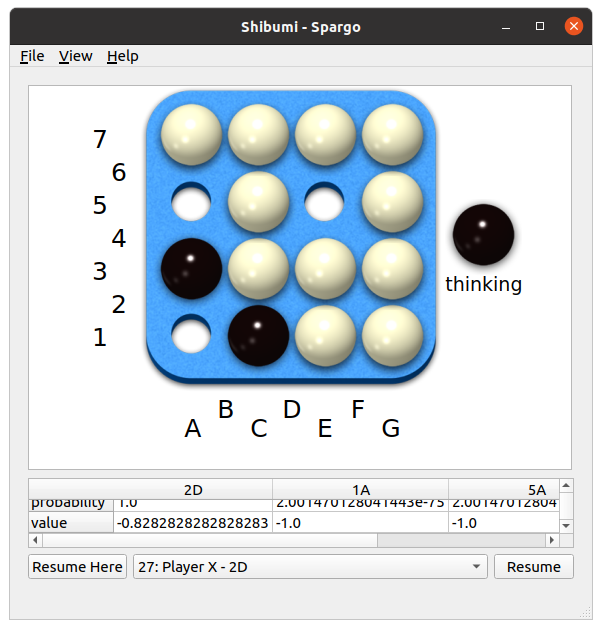 The AI was playing black here, and I thought I had it nearly defeated. However, it played something I didn’t expect at all: 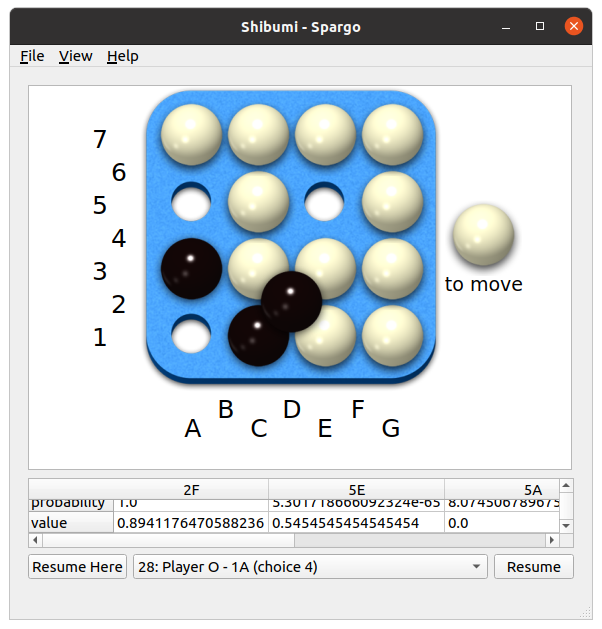 That was surprisingly effective, because it allowed a response without violating the ko rule. I thought it made sense to capture, but see how that turned out: 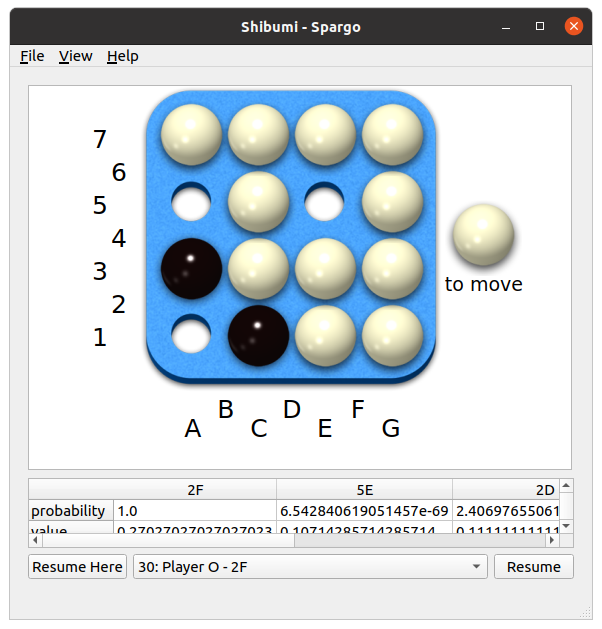 That’s almost the same as the position above, except that now it’s white’s turn to move, instead of black’s.

I tried to build up higher in the bottom right, but I couldn’t break out of the ko cycle.

That forced me into this unpleasant position: 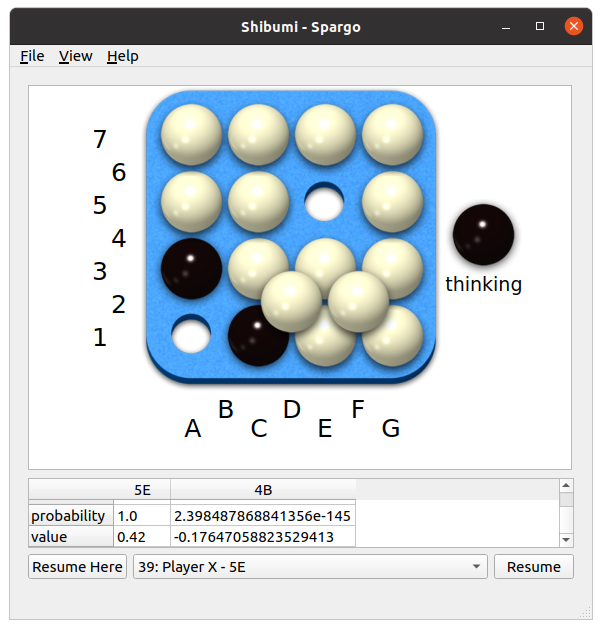 Now the AI can capture all my pieces with:

The AI still isn’t that great, so I was able to recover and win the game, but I was pleasantly surprised to learn something from the AI. After going back and reviewing the moves, I think the correct play for me was to wait another turn before capturing. 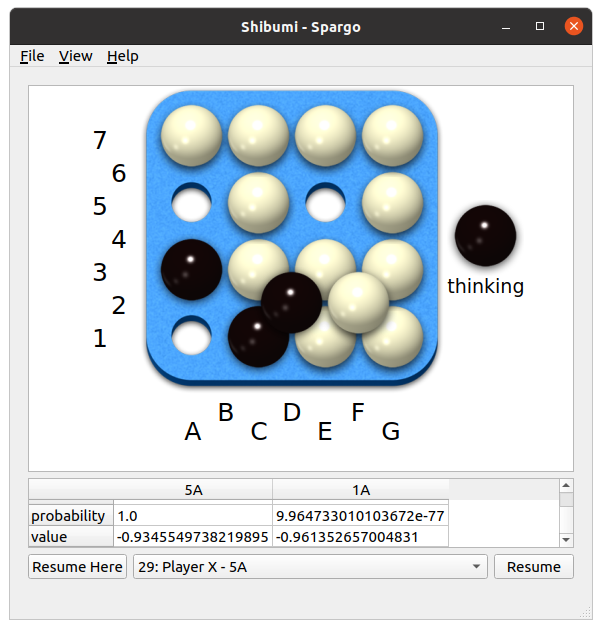 Now, whether black responds with 5A or 1A, I can capture everything and roll on to victory.

Added Margo as 6x6 version of Spargo, and fixed a few bugs by breaking connections with covered marbles. Also added a sandbox mode. As the sandbox mode added more features, I decided to move a bunch of controls out of the graphics scene and into regular widgets.

Added Spaiji game, and the ability to choose which colour to play. The most fun part of Spaiji was discovering a scenario not covered in the rules, and discussing a solution with Néstor. While I was testing, it crashed when it found positions with no valid moves, like this: 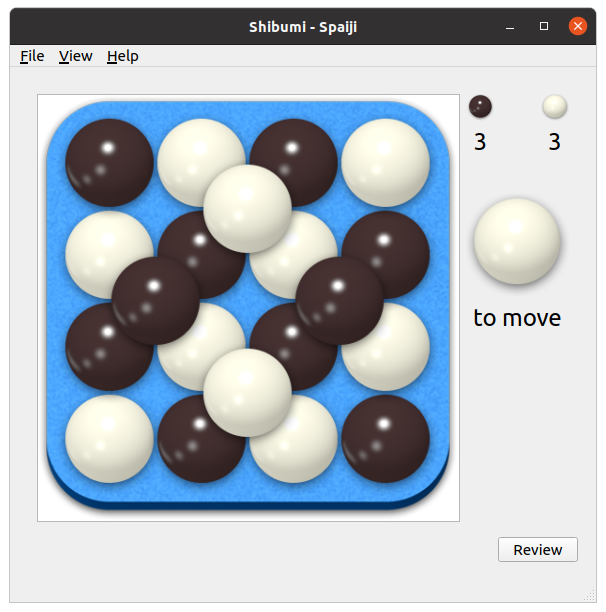 In that position, you can play one marble, but then there are no neighbouring spaces that you can play the second one. After discussion with Néstor, we decided that the game should end immediately, and then the winner is decided as usual by the biggest connected group. In this case, they are tied at 3, so Black wins the tie.

I tried a couple of other cached methods, but they weren’t significant. What was surprisingly effective was switching some IntEnum values to int. I noticed that about 7% of the run time was being spent in EnumMeta.__getattr__(), so I switched several references. That brings the performance to a little under 4 seconds per move.

Finished adding Spire. New games now take about two days, if they don’t require any new features. I have yet to achieve an ideal game where a player places their own colour on the peak of the pyramid. I did manage to place a red on the peak, but that’s a loss.

When I went back to measuring Spargo performance, it had improved to just under 3 seconds per move at 100 iterations. After adding a multiprocessing pool for the playouts, the performance improved to 1 second per move. That makes Spargo playable again at a competitive level, bringing the time per move down from around 3 or 4 minutes to around 1 minute. Hopefully, the tensorflow analysis will be even faster.

With the performance improvements, I wondered if Margo 6x6 would have a playable AI, but it still crashed from too much recursion. I switched the random playouts from tail recursion to a loop, and now it doesn’t crash. Even with the improvements, though, it’s still 22 times slower than Spargo 4x4. It will feel a bit like playing by mail, I suppose.