Play board games that use the Shibumi game system of marbles stacked on a 4x4 board, build computer opponents for those games, learn strategy, and analyse the structure of the games. 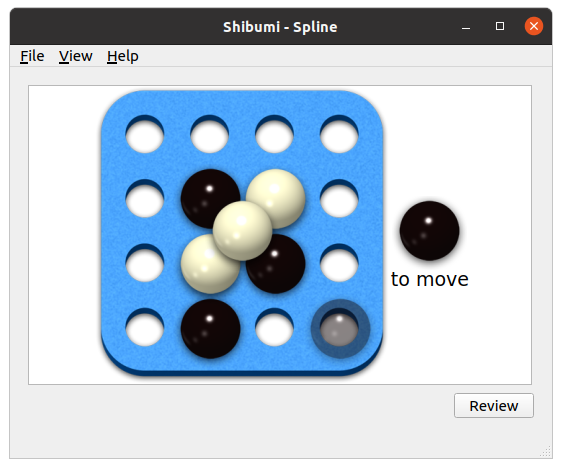 Even though Shibumi Games has a graphical display, it is a regular Python package, so you can install it with pip install shibumi. If you haven’t installed Python packages before, read Brett Cannon’s quick-and-dirty guide.

Then run it with the shibumi command.

The default installation generates some errors about bdist_wheel that don’t seem to actually cause any problems. You can either ignore them, or install wheel before installing Shibumi Games.

qt.qpa.plugin: Could not load the Qt platform plugin “xcb” in “” even though it was found.

This is a PySide2 bug that is missing some dependencies. You can work around it by installing those dependencies like this:

The Shibumi game system was designed by Cameron Browne and Néstor Romeral Andrés. The complete set of game rules are available on the nestorgames web site, and the games used in this project are used with the generous permission of the designers. There are more games in a BGG list.

The marble and board graphics were designed by Cameron Browne, and are used with permission.

Some of the buttons combine Cameron’s POV-Ray graphics with icons from the Open Iconic project.

If you’d like to help out with the project, or add your own games, see the CONTRIBUTING.md file in the source code. For all the details, look through the design journal for the project.

Shibumi games are built on top of the Zero Play library that you can use to build your own games.