When I tell people that I like domino games, they are often surprised to hear that you can do more than just match the numbers. If you look in a book of games, often with Mr. Hoyle’s name on the cover, you might find the basic game and maybe All Fives. If you’re lucky, you’ll find Chickenfoot and Mexican Train.

The book of rules includes problems to solve for each puzzle. The Unmatched Donimoes problems are patterns of dominoes for you to start from, like this: 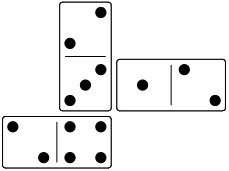 To try the puzzle, get a set of dominoes. Then either read the rules, or download the PDF.