These are new puzzles that aren’t finished yet. You can try them out and let me know what you think.

Dice can walk or drive to their destination.

Get all the blank squares into one connected group. Diagonal connections don’t count.

Arrange the dominoes in the problem’s starting position. Then place a die on each of the corners, so its top face matches the number it’s on.

Each die can do one of three things on each turn:

There are several limits to the moves. Only one die can move at a time, so the other three must be resting on their own numbers. Once a die starts walking, it must continue until it rests on its own number again. A die can only walk onto an empty, neighbouring number, and diagonal neighbours don’t count. A domino can only be driven when it has a die on it, and driven along its longer direction, not sideways. It moves one space at a time, and all the dominoes must be in one connected group before and after each move. Again, diagonal connections don’t count.

Here are the starting positions for several Donimo Drivers problems. The solutions are listed at the end. 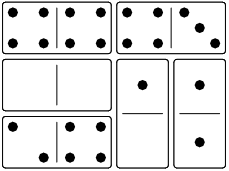 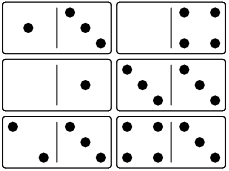 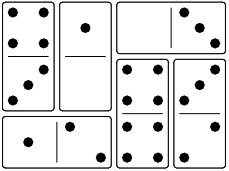 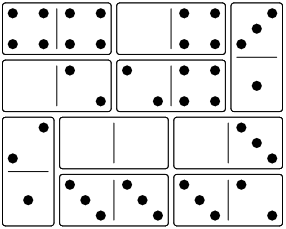 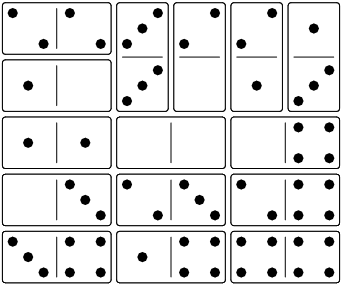 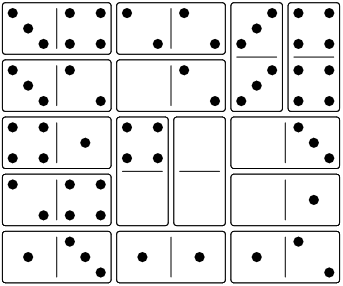 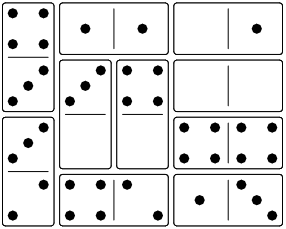 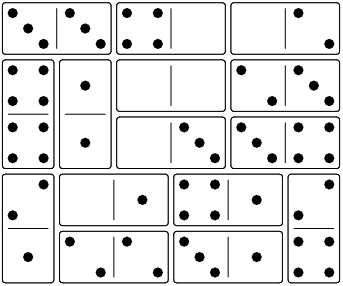 The idea was to avoid the slow setup phase at the start of the other puzzles.

The goal is to add all the dominoes from the queue onto the board. Each problem shows the queue of dominoes to add, from left to right.

Take the two dominoes from the left end of the queue and place them on the board in the same position relative to each other.

For example, if this is the queue:

There are only two ways a domino can move.

The next domino from the queue can be added to the board if it matches at least two of the adjacent numbers on neighbouring dominoes. Those two adjacent numbers can match the two ends of the domino, or both match one end.

In this example, the 13 can be added, because it matches the 1 below and the 3 below.

In this example, the 52 can be added, because it matches the 5 beside and the 5 above. The 52 could also be added in the vertical position. 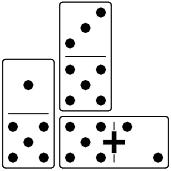 Move a domino one space along its long axis so that it ends up with at least one of its numbers next to an adjacent number that adds up to six, or it matches at least two of the adjacent numbers on neighbouring dominoes.

In this example, the left domino can move down, because the 1 and the 5 add to six.

The left domino can move back up, because the 1 matches the 1 above, and the 5 matches the 5 to the right.

All the dominoes on the board must stay in one connected group, you can’t split the group after moving a domino.

Here are the starting positions for several Adding Donimoes problems. The solutions are listed at the end.

The dominoes are played on an 8x8 grid. Make the edges out of face-down dominoes, or play on a chess board where a pair of squares are the same size as one of your dominoes.

Choose which player will play the tetrominoes dark side up, and give them 3 dark player tokens. Give the other player 3 light player tokens. Each player draws 3 dominoes and keeps them hidden from their opponent.

Dominoes and tokens must be played on empty spaces so that they touch the edge of the board or another item that’s already on the board. Diagonal connections don’t count as touching.

If a number on a domino is completely surrounded by other numbers, the surrounding numbers must exactly equal 3 times the number of neighbours. Corners must have neighbours equal to 6, sides must equal 9, and centre spaces must equal 12. If a square has only one empty space next to it and it would be impossible to fill that space with a legal number, then that space must be a road. After placing a domino, check to see if any spaces must be roads and place road markers on them.

At the end of the game, all road spaces on the board must form one connected road network, so you can also place road markers where they are needed to keep the roads connected.

If an empty space has no empty spaces next to it, then no dominoes will fit on it. Place a road marker on it.

If a player token is on a space that must be a road, replace it with a road marker and give it back to the player. However, check to see whether the player can use it to play a tetromino before replacing it. The active player can choose what order to play road markers.

If a player’s token is getting replaced during their opponent’s turn, they may use it immediately to place a tetromino. The opponent then continues their turn if they have more road markers to place. (Should the player’s turn end when they have to replace another player’s token?)

Tetrominoes can’t be moved after they are played, and they must be played with the player’s side up. If a player’s token is getting replaced and there aren’t any tetrominoes that will fit, the token is just returned to the player.

The player who plays 4 tetrominoes wins.

Here are some examples of the diagrams that you can draw using code blocks:

Basic dominoes are shown as numbers joined by the | or - characters. Leave spaces between the numbers that aren’t joined.

You can mix unjoined cells from Dominosa in with regular dominoes.

Usually, the dominoes are all lined up with each other, but you can offset them by half a space.

If your markers aren’t unique, list them with their positions.

There are two special markers: lower-case b and w for black and white markers.

You can add dice by giving the coordinates and the value on top.

You can add arrows by giving the start coordinates and the directions to move.

You can combine the different types of extras into the same diagram. Order of the sections doesn’t matter, but order of the arrows matters if they overlap.

Dominosa boards can include a partial solution, but one of the headings must be “Dominosa”.

The walking moves are described with the number of a die, a direction, and a distance. For example, 1R3 means move the 1 die to the right, 3 spaces. A move with no distance means one space. The driving moves have a small letter ‘d’ for ‘domino’ after the die number, like 1dR.

Here are the solutions to the Adding Donimoes problems. For each step, move the listed domino left, right, up, or down. Adding moves contain the domino numbers, (H)orizontal or (V)ertical direction, and the position to place it. The top left corner is 11, one space to the right is 21, and one space below is 12.

Donimoes is an original puzzle designed by Don Kirkby.