I started the project with the idea that I could create something like the Rush Hour puzzle that used a standard set of dominoes. They would move along their long axis like the cars in Rush Hour, but instead of being constrained by a box, they would have some restrictions on how they moved, related to their numbers.

My first idea was to require that each domino had to share a number with at least one of their neighbours. I would generate a rectangular layout, make as many moves as possible, and then print out the last board position. The goal was to get the dominoes back into a rectangular layout. This was fine as a proof of concept, but it wasn’t easy to see where the legal moves were. I also wasn’t too happy with the name, Domiculture. My idea for a theme was growing plants and harvesting them.

The second idea was to capture dominoes with matching numbers, a bit like the old Shanghai solitaire computer game, but you have to move the tiles so that the matching numbers touch before you can capture both dominoes. This was easier to see, but the movement was a bit too restrictive when every move had to make a capture. To allow for more movement options, I also allowed moves that didn’t capture if two neighbouring numbers add up to six.

Until this point, I had just been generating random layouts, and reporting the ones with the longest solutions. The next thing I tried was using evolutionary search to make small changes to the best layouts, hoping to find similar, slightly better layouts. I used a library called DEAP, that offered lots of features for evolutionary search, but I found its API very confusing.

I also started drawing diagrams, so I could eventually publish the problems for other people to try. I think this was one of the first projects where I used the turtle graphics support from my live coding project. It’s fun, because it updates the diagram as you change the code. I think it might also have been one of the first times I used the GitHub pages feature to host a website.

My second successful puzzle, Blocking Donimoes was very similar to my first, failed attempt. Requiring matching neighbours for all moves was too hard, requiring matching numbers somewhere on a neighbouring domino was too hard to see. What worked was to forbid matching neighbours. Each problem starts with a stretched out layout, and you have to compress it into a rectangle without ever letting matching numbers touch. This puzzle was later renamed to Unmatched Donimoes, because there’s a traditional game called Block Dominoes.

I experimented with the idea of adding dominoes from a queue, but it was too hard. The idea was to make a puzzle that was faster to start solving, because you didn’t have to set up all the dominoes before starting. Instead, you added them one at a time.

During our summer travels, I found a book that included a domino game by Sid Sackson: Mountains and Valleys. Around the same time, I heard that James Kyle had ported Fujisan from the piecepack to dominoes. I decided to start building a bigger game collection that included domino games and puzzles by other designers, as well as my own.

The big task for this year was to add my first original game to the collection: Tetradominoes. I was trying to come up with ways to combine the tetromino shapes with the dominoes, and making a group of the two numbers on the domino you just played seemed to work well. My favourite innovation was not letting two of your tetrominoes touch. That let players build up a structure in the shelter of their opponent’s tetrominoes. It also creates a come-back mechanism. I’d like to find more games or puzzles that use the tetrominoes.

I also continued to adapt other people’s games to use dominoes: Cobra Paw was trivial to adapt from its custom dominoes to a traditional set. Domino Finder was more loosely inspired by other memory games. I also included my favourite traditional game: All Fives.

I finally got frustrated enough with DEAP to build my own evolutionary search. It doesn’t have all the features of DEAP, but I find it much easier to use.

In the spring, during the pandemic, I worked on Ladder Donimoes, moving pieces on top of the dominoes for the first time, and inspired by boboquack’s Magic Maze on Puzzling.SE. It ended up being too hard, but it eventually transformed into Mirror Donimoes, a puzzle that I’m really pleased with. Mirror Donimoes is the only puzzle where I can create problems by hand, because it’s clear enough to see the movement and goals. In fact, the hardest problems had to be created by hand, because the computer solver can’t handle them. I enjoyed searching for the right rules, trying to balance several goals:

Bee Donimoes started out as a game called Mephisto, by Christian Freeling. I tried it out, but I didn’t really like the movement mechanics. It has similar goals and player interaction to Ricochet Robots, so I decided to keep that, and look for a new set of movement mechanics. I settled on moving dice around on top of the dominoes, and only letting them land on their own numbers. The key idea is that the dice can modify each other’s movement, similar to Ricochet Robots and Fujisan. In this case, a die can turn a corner when it passes over another die.

I originally made the blanks unusable, except for the blank on the same domino as the queen. Looking for ways to simplify the rules, I tried to see whether the special rules around blanks were actually helpful. I solved a thousand problems at each size from three to six pips, and compared three possible rules for blanks:

I thought that making the blanks wild would be the simplest to explain, but I was worried that it would make the solutions too easy to find. Here’s what the results looked like: 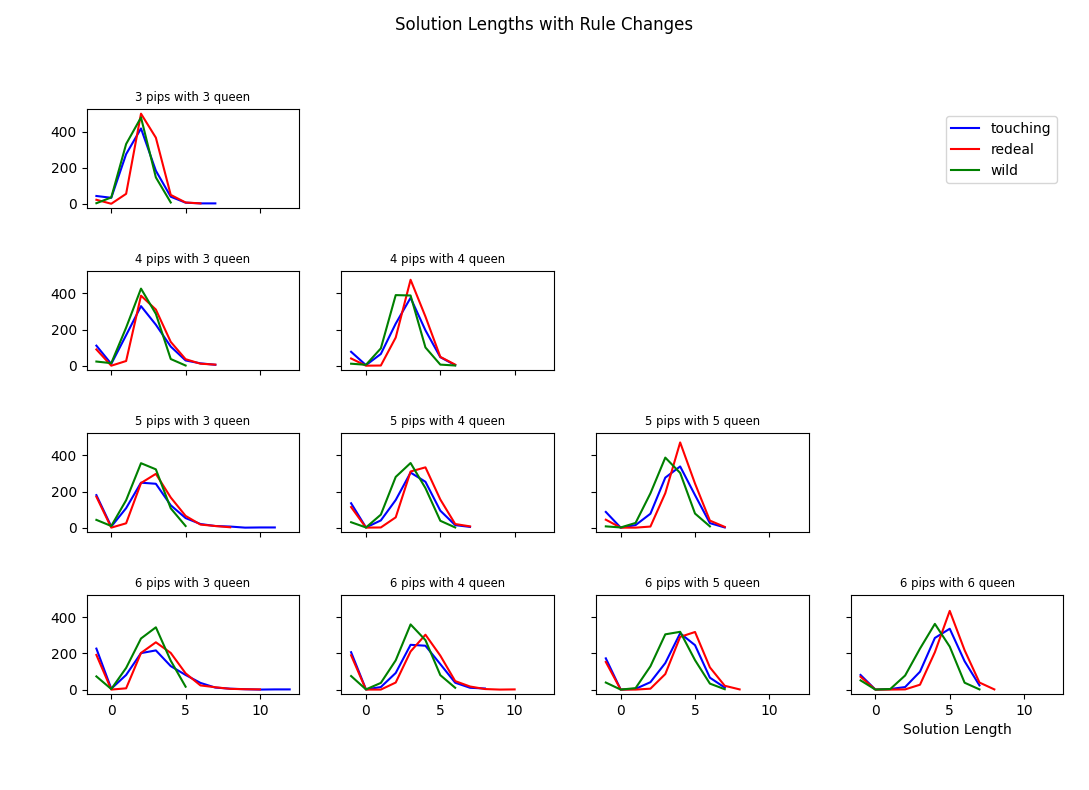 I decided to make the blanks wild in the standard rules for simplicity, and add an advanced version with the queen’s blank as the only wild one.

I adapted the mechanics of Fresh Fish to make Tetromino Road. It’s another use of the tetrominoes, but it’s not quite ready to add to the main collection. Domino Drivers looks promising, and I made good progress with it, but it’s too hard for the computer to solve!

The big success this year was adapting Domino Runners from Winkeladvokat and Cabale. Kerry included it as an article in Abstract Games Magazine issue 23. After that, I started to think seriously about publishing the collection in book form, adding a table of contents, a cover, and a selection of classic puzzles.

Finally, in April, I published the book. I think it turned out well, the diagrams look nice, and it fits inside the dominoes tin.