In late 2018, I started the project and added the rules of Tic Tac Toe, plus a basic MCTS player.

In 2019, I converted the Shibumi Games project to use this library, and measured how win rates varied with MCTS iterations in several games. I tried adding neural networks, but never really got them to be stronger than basic MCTS with random playouts. I read several academic papers and books to try and understand the tools better.

I took some of the ideas from my other projects around writing unit tests for GUI code, and applied them to PySide2’s QGraphicsScene. Most of it worked pretty well, but the fonts were different between my workstation and TravisCI. I also spent a long time tracking down PySide2’s installation bug. Both of those were easier to deal with once I set up the travis-local.sh script. One idea: use QGraphicsScene for both the expected image and the actual image.

Actually got a GUI working with a playable Tic Tac Toe, then added Connect 4. Connected an MCTS player to the GUI, and then added Othello.

After adding a review feature, I think the basic version is done. Before I go back to fighting with machine learning, I’m going to try converting the Shibumi project to use the new GUI.

Spargo has a superko rule that forbids any game state from being repeated. That means that you have to track the current board state, as well as the history, so I switched from board classes to game state classes.

Released the first usable release of this and Shibumi Games. One nice feature is the adjustment of AI strength after wins and losses.

As the Shibumi games are gaining more controls, I decided to move most of the controls out of the QGraphicsScene, so developers can use Qt’s layout classes.

Spargo was quite slow, so I added support for multiprocessing in issue #33. It definitely improved performance, but not as much as I’d hoped. 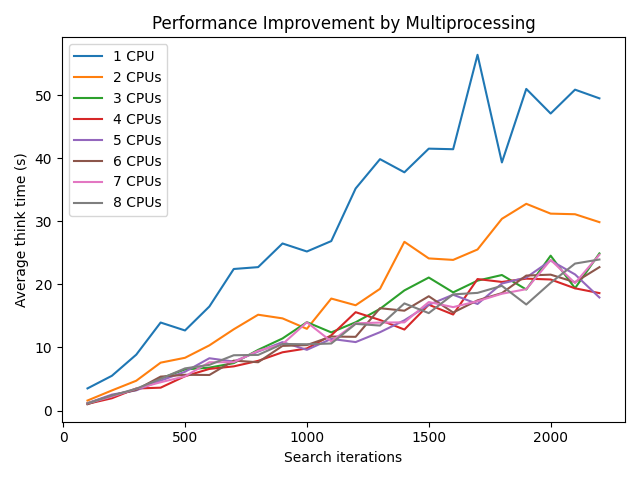 I see definite improvement up to three CPUs, and maybe to four, but nothing beyond that. I guess hyperthreading doesn’t help my workload, because my laptop has four physical cores and eight logical processors. That makes sense for mostly numerical calculations, I guess, but it’s strange that the fourth processor improves so little. I wonder if I’ve got inefficient communication somewhere slowing things down.